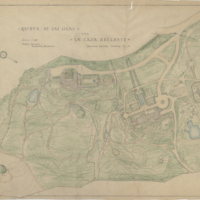 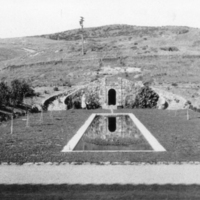 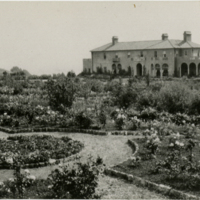 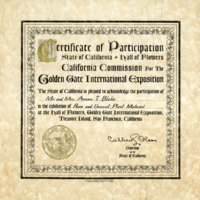 Mabel Symmes, who graduated from the University of California in 1896 and returned to study landscape architecture in 1914, developed a comprehensive site plan for the homes and gardens of both Anson and Edwin Blake. Her plan combined the two Blake brothers' properties into a single design although she delineated the boundaries of each parcel. The scheme included a common entrance, and therefore Edwin's entrance road passed through the Anson Blake property. Symmes also indicated garden pathways that moved freely from property to property. The Spanish titles on her drawing are probably references to the property's heritage: Edwin's home is labeled Quinta de La Lilas ("The Inn of the Lilies") and Anson's is named La Casa Adelante ("The House Far Away”).

In addition to proposing symmetrical gardens extending from each of the two homes, Symmes designed a path system to transform the grassland of the two properties into a series of defined, accessible sections: a redwood grove, conifer hill, oak ridge, ceanothus wood and two orchards. Anita and Mabel used the 1922 plan as a guide, but frequently adjusted the scheme over the years to accommodate the natural features of the site and Anita's passion for collecting new and unusual plant specimens.

To the east of the Anson Blake home, Symmes proposed a formal grotto and reflecting pool fed by a hillside spring. The two streams draining the property were stabilized with vegetation. The northern stream, originally proposed to become a ceanothus wood, was transformed into a shady redwood forest with rhododendrons and other moisture-loving understory plants. Rock present on the site was used for garden walls, steps, open roadside swales, paths and pool edging. Anita Blake became a nationally respected collector of plants and corresponded regularly with botanists, nurserymen and other collectors from around the world. Many unusual and untried plants, especially from other Mediterranean climates, were introduced to California for the first time at Blake Garden. Cultivated varieties were obtained from sources throughout the world, including ferns, vines, South African bulbs and unusual conifers. At one point, the garden was reputed to contain about 2,500 species.