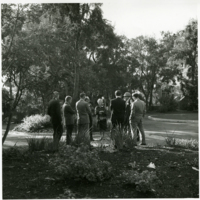 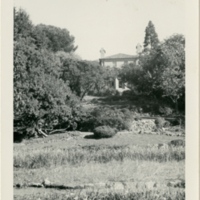 In April 1962, Anita Blake, the last living Blake family member, passed away. Geraldine Knight Scott, a retired landscape architect, was hired to teach planting design and oversee changes at Blake Garden with Mai Arbegast, who had reduced her teaching hours in the early sixties. For a few years, Scott and Arbegast worked concurrently at the garden. Arbegast remembers Scott fondly, recalling their shared office space and many debates about the depth of plant knowledge required by landscape architecture students.

Scott's appointment as the director of Blake Garden heralded a new era in the garden's history, and she implemented profound changes. Her tenure began with the clearing and pruning of overgrown plantings. While working with Arbegast, who was locating plants on a drawing of the garden, Scott took stock of the existing conditions by having an engineer locate and plot the paths and structures at a scale of 1/8" = 1'-0". Later, she directed students in the making of a more detailed topographic survey, also at 1/8" = 1'-0". The survey included one-foot contour intervals.

Organized into twenty-three sheets showing different sections of the garden, these surveys indicated that the building locations and most of the roads and major pathways of Symmes's original design scheme had been implemented. Over the years the Blakes had made some significant changes from Symmes's plan: they substituted the ceanothus wood with a moist redwood woodland around the northern stream; the orchards were never planted; and the pond was never built. They also added a series of interlaced diamond beds on a western axis from the living room window. The most significant change to the Symmes plan was implemented in the early 1950s when the Anson Blake portion of the garden became separated by a fence from the former Edwin Blake property, requiring a redesign of pathways in the northern section of the garden.

Scott implemented many changes in two phases. The first phase was the general clearing of vegetation and making improvements necessary to ready the garden for the public. The second phase began in 1967 when the UC Regents decided that the Blake House would become the residence of the UC President and allocated funds for major landscape improvements. Scott's design proposals in this second phase were directed by her Long-Range Development Plan, completed in November 1964.

SCOTT'S PHASE ONE IMPROVEMENTS: PREPARING FOR THE PUBLIC

Scott's practicality and commitment to Modernist design profoundly changed the look of specific sections of Blake Garden. Many of the changes addressed the functional problems in making the garden safe, secure and useful to the university and the public. For instance, to create an open space large enough for group gatherings, Scott proposed significant modifications to the area south of the house. Here, she removed a jungle of vegetation and a dilapidated service structure located between the entry drive and the original rose garden. In their place, she installed an open lawn designed with the asymmetrical layout and precise geometric arcs characteristic of many modern landscapes. The new lawn was the site of a Maypole dance in 1966 and has subsequently hosted graduations, receptions, and other university events.

Additional enhancements to facilitate greater public use of the garden implemented by Scott included creating new paths in the eastern corner and simplifying others elsewhere. She replaced exposed soil path surfaces with a harder surface of decomposed granite to reduce hazards and improve accessibility and added thirteen parking spaces along the entry drive for students and visitors. Scott also oversaw the removal of numerous Canary Island pines in the northern corner of the property and the planting of privet hedges around the vehicular turnaround and a holly hedge along the driveway. Landscape Architecture professor Russell Beatty recalls that Scott or possibly Mai Arbegast was responsible for a hedge of Chilean guava around the brick patio in front of the north wing of the house. Scott also planted more drought-tolerant native plants on the west slope below the main house.

Although Scott introduced a modern vocabulary to the newly-developed portions of the garden, she also maintained major aspects of Symmes's original design scheme. At a time in design history when modernists turned their back on the symmetrical geometries of the Beaux Arts tradition, Scott preserved most of classical features designed by Symmes, including the grotto and reflecting pool, the pink garden, the yellow garden and the lattice bed garden. She even maintained the symmetrical geometry of the rose garden, located to the south of the house where she made many other changes. Here, the roses, which never flourished, were replaced with perennials, and the pool was modified by removing four water runnels that Scott considered tripping hazards for the public. Apparently, a trellis that once enclosed a section of the rose garden was also removed, but it is unclear when this happened.