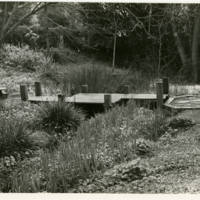 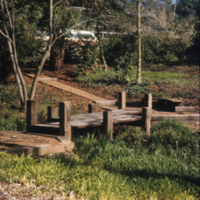 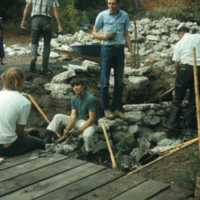 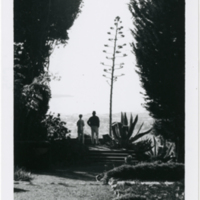 As Scott reduced her time with the department, Russell Beatty assumed the duties of Director of Blake Garden in 1967 when he was hired as an assistant professor. Beatty had been a former student of Scott's, and they served as co-­directors of Blake Garden for a semester. Beatty carried out many of Scott's earlier design proposals, but he also made his own mark by cultivating a vibrant social spirit in Blake Garden with numerous student projects.

Under Beatty's directorship, the garden became an "outdoor laboratory'' for plant identification, planting design, problems in spatial relationships and other studies in landscape architecture. The student projects began with a small Japanese-style bridge (inspired by Scott's love of Asian art and frequent trips to Japan) near the head house. Another student project was a seating area, constructed in the late 1960s out of railroad ties and installed in the upper lawn. This seating area became an important meeting place for classes to gather before spreading out into the garden. Within two decades, the seating material began to disintegrate, and in the mid-eighties President Gardener allocated funds for garden manager John Norcross to rebuild it in a modified design. Other projects built by the students under Beatty's direction include the lath house, the tiered planting beds adjacent to the head house, and the stabilization of stream banks along the southern stream.

In 1973 a functional garden was created in the area that is now the cottage garden north of the head house. When Beatty was appointed director, the area was "ugly and not usable" and there was a lot of "stuff" with little merit or interest. Beatty designed a series of tiered wooden beds to make it a utilitarian cutting garden where the staff planted flowers. Every Monday the staff would deliver a bouquet of flowers from the garden to the main house and to the LAEP Department. Beatty also recalls building horseshoe pits in the current cottage garden for the garden staff, but they were later removed. In recent years the wooden beds have been gradually replaced by student­-built rock retaining walls, and the garden now includes vegetables as well as flowers.

Another design feature installed during Beatty's tenure is the PVC trellis along the western edge of the southern lawn. Introducing a rose trellis here was part of Scott's Long-Range Plan #1 and her Intermediate Plan. In 1972 Beatty held a competition among the students working at Blake Garden to design the trellis. A planning student with no design experience brought Beatty "a little thing out of coat hangers," which he and Michael Laurie selected as the winning design. The garden staff and student employees then brainstormed how to construct the arbor and built it out of white PVC irrigation pipe. Other projects supervised by Beatty included the overlook above the Australian hollow and the installation of automatic sprinkler systems in some areas.

In 1973 the Landscape Architecture Department modified the management of Blake Garden by appointing a Blake Garden faculty committee to oversee garden decisions. Beatty, now a lecturer with employment security, became chair of the committee, and although he reduced the number of construction projects, he continued to lead the decision-making process at Blake until his retirement in 1993.

Landscape architecture students in the 1970s and early 1980s focused more on regional environmental issues than traditional gardening. This resulted in decreased student interest and activity at Blake Garden. Furthermore, the prevailing modern aesthetic made the garden's Beaux Arts design less appealing to students. To counter this trend, the newsletter Adelante, edited by student Linda Haymaker and supported by Beatty, advocated for the garden as a learning environment and lamented the change with articles such as "Where are the Students?”