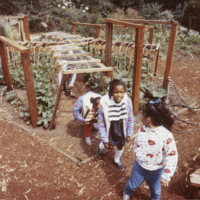 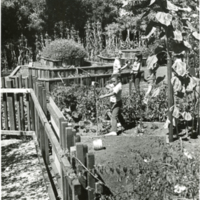 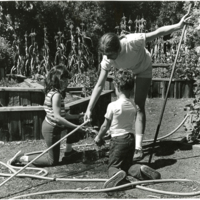 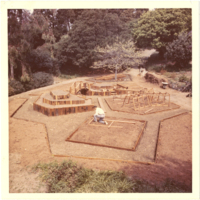 One of the most exciting projects during Beatty's tenure was the Children's Adventure Garden and Playground, initiated by Walter Doty, former editor of Sunset Magazine, in 1970. Funded by Chevron Chemical Company, the Children's Adventure Garden and Playground evolved from the idea of photographing young gardeners (aged five to ten) for an annual promotional gardening book that promoted "a revolutionary concept of gardens for kids." The Adventure Garden project echoed the social climate of the 1970s and its renewed interest in gardening, nature, and self­-determination. From a pedagogical perspective, Beatty envisioned a hands-on educational experience for children in Blake Garden. "We did not want gardening to be a tedious, disciplined, joyless experience...The children should want to play in the garden, to have fun. PLAY! That was the key word." The result was an adventure playground combined with growing vegetables and flowers. Simple structures such as raised beds, bean tents, and tunnels were created in addition to growing plots laid out in irregular forms. Plants were chosen either for their edible or unusual features.

Beatty and Jack Chandler, a Napa Valley landscape architect, laid out the initial garden design. A student in the LAEP Department was hired annually to coordinate the activities, assist the children in the garden, and make necessary changes in the physical design. In an American Horticulturist article about the Children's Adventure Garden and Playground, Beatty recollected, "we adults who originally designed the garden quickly learned that not all our preconceived notions were important to the youngsters. Graduate student Dan Wormhoudt made many design changes after the first year based on the need to provide a balanced mix of private and communal spaces." The experimental approach in pedagogy was echoed in the constant evolution in design of the Adventure Playground. For instance, a "cute little bridge" between two tiered raised beds was removed because it was infrequently used and seen as an obstacle for child play. Small bean-covered teepees were replaced with a large bean house that formed an igloo wherein the children could gather.

The program ran for three years, and during this period local school children, including President Hitch's daughter, learned to grow seeds in the greenhouse in the winter and plant them in the adventure playground in the springtime. The children were responsible for tending all the plants with the guidance of students from the LAEP Department. Ultimately, a funding crunch discontinued the program, and the adventure playground was torn down and replaced with a meadow.